Menu
Nursery places are available from September 2020. Tours of the school can be arranged by contacting the school office on 01442 402244.

Mrs Wollington (Monday to Thursday) and Mrs Long (Friday) are the Teaching Assistants in the afternoon.

Helping Children with Writing Year 1 and 2

Year 1 and 2 Christmas Production: The Innspectors

Well done to Years 1 and 2, who performed brilliantly in our Christmas play, The Innspectors. This play was all about a group of ‘Innspectors’ who inspect the inns of Bethlehem. They discover Jesus, who has been born in a stable, and see the shepherds, sheep and Wise Men come to visit the baby. All the children enjoyed singing the fantastic songs and acting out this entertaining story.

Today we had a surprise. Some fairy tale characters had set us a Maths Trail to solve. We had to use our knowledge of number facts to solve the puzzles set by different characters. It was great fun!

On Thursday 29th November we had our Great Fire of London Day. First of all, we had to learn different trades, like weaving, baking, being a scribe and making pomanders. We had a snack of bread and cheese. Then we acted in role as people living in 1666. Some of us worked in shops, like the chandlers and apocathary, and had to serve customers. In the afternoon, we acted in role as people trying to put out the fire. We all had a fantastic day to end our topic!

In Maths today, we played a game in pairs to practise working out the difference between two numbers.

Today we went to Hemel Hempstead School to do some baking. Mr Mansbridge taught us how to make some dough and how to form different types of bread. We also decorated our own cake with cherries and currants, to make a smiley face.

We loved making our sock puppets during Anti-bullying Week. All our puppets were different to show that we are all individual.

Today in Literacy, we acted out the beginning of the traditional story of Rapunzel. We had to role play the conversation between the witch and the farmer, thinking about how they felt and what kind of person they were.

Year 2 Trip to the Museum of London

On Thursday 4th October, Year 2 went on a trip to London to learn more about the Great Fire of London. We visited the Museum of London and saw the equipment they would have used to put out the fire. We also went on a guided walk and saw some of the sights of the fire and St Paul's Cathedral. We all had an amazing time!

Today, in Forest Schools, we lit a fire. We used our senses to create some vocabulary banks, to help us write some poems. The fire helped us to imagine what it would have been like during the Fire of London.

What happened during the Great Fire of London?

We found out about the sorts of jobs people did in 1666. We acted in role to imagine what it would be like to live in London before the fire started.

In Maths we have been having fun working on place value. We played a game called ‘Make 100’ using diennes to help us.. We had to roll a dice and add that number of cubes. Each time we made ten, we had to regroup ten ones for one ten rod, until we made 100.

Today we went for an autumn walk. However, we spotted a very strange looking man, who was digging for something. The man told us he was called Samuel Pepys and he thought the year was 1666! It seemed we had gone through some sort of time tunnel. We interviewed the man to find out who he was and what he was looking for. He told us that he was looking for his special cheese, which he had buried in his garden. We helped him look for his cheese.

Today we went on an autumn walk. On our way, we met a strange man, dressed in an old cloak, who was looking very puzzled. He told us he was searching for his cheese and asked us to help him find it! We found the cheese buried in the ground.

We wondered why he had buried the cheese and asked him lots of questions. The man told us his name was Samuel Pepys and he had buried his cheese in the garden to protect it from a terrible fire.

Year 2's visit to London for our Great fire of London topic.

On Thursday the 12th of October, Year 2 class visited London. We went to learn all about the Great Fire that took place in the year 1666, and how the people and London city recovered from such a great tragedy.

On Friday the 10th of November, year 2 had a visit from the fire brigade. They were here to show us how fast a fire could spread, by setting alight our model houses of London we had built for home learning.

Monday the 30th of October.

International fortnight took place on the 9th of October, through to the 20th. Each class took inspiration from a different culture and presented a dance during a sharing assembly to the school. Year 2 did a wonderful dance called Jai Ho during there dance sessions for PE. Here is a small clip of our dance. 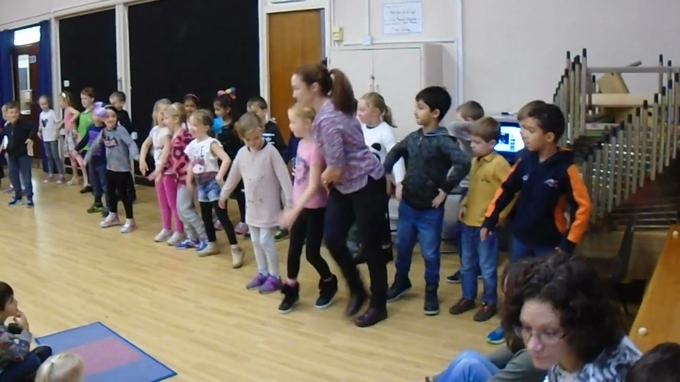 Our class went on a walking trip to Cavendish secondary school, to attend the year 2 target games event. We took part in several different events led by the year 9 students, and we had a great time trying lots of new and exciting activities.

On Friday the 12th of January 2018, Mrs Rose brought her huskey, Thea, in to visit year 2. We were able to find out about how she would be able to survive in a polar region, and how she has adapted to live in this country.

We made models of a Norweigen fjord's for our frozen topic. We had to include features like mountains, cliffs, waterfalls and lakes.

On Thursday 1st of February, Year 2 role played flying on a plane to Norway. We studied maps to find out where Norway is located. Today, we sailed to the Sognefjord on a cruise ship. We looked through the port holes to see what the landscape was like and what landscape features we could see.

We had a company called Relax Kids, come in to school to give us a session on how to feel calm and relaxed. We had so much fun, and it was so relaxing to follow the exercises that we were set.

For our polar topics, in art we have been looking at painting polar bear faces using different blue tones of paint. Here is some of our work.

We are incredibly impressed here in year 2, with the fabulous Easter bonnets you have produced this year. Well done, you should all be very proud, the staff loved them !

In art, Year 2 have been thinking about the way flowers grow and the way they look. We have been outside sketching some wild flowers within the school grounds, and also looking at some shop bought flowers too. We then moved on to create some flowers using different coloured paper. We shaped some petals and thought about adding leaves to stems. Once we got the hang of making the shapes, we moved on to using metal wires. These were a bit tricky, but we managed to make some beautiful flowers. Here are some pictures of our masterpieces.

This term, we have been looking at Just So stories by Rudyard Kipling, in which the stories pretend to explain animal characteristics, such as the origin of the spots on the leopard. The children have really enjoyed recreating their own versions of these stories, using their knowledge of African animals and previous knowledge of the stories we have read. Some of our children were confident enough to act out the stories in our recent class assembly. They all did a fantastic job and we enjoyed sharing all of our stories together.

This term, Year 2 were fortunate enough to be invited to take part in a singing festival at St Johns church in Boxmoor. This was organised by the Dacorum music service, enabling several Year 2 classes from different schools to participate in the event.